The tales of motherhood in the wilderness

Have you ever had an encounter with the tallest land mammals- the giraffes? Many Africa wildlife safari goers who venture on Africa safaris to various national parks in the sub-Sahara region are fascinated by these majestic beings. This is mainly due to their poised stature and calm and elegance demeanour these animals exhibit as they go about their daily routine in the tropical savanna wilderness. 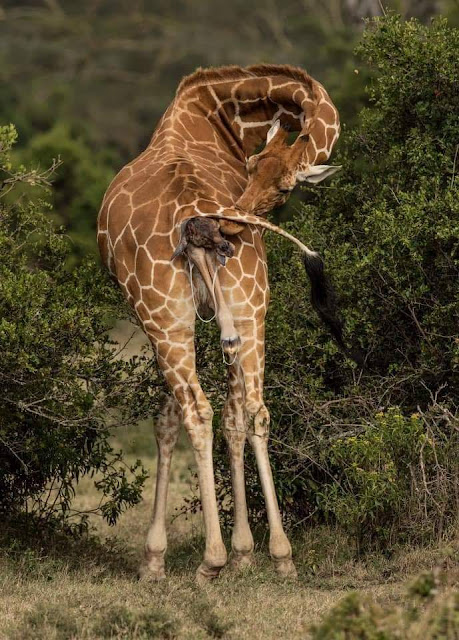 One lucky Africa safari goer while his Kenya wildlife safari had a unique encounter to catch glimpses of these elegant wild mammals as it was giving calving ( giving birth to a calf- baby giraffe).  If you thought its only humans (both mothers and babies) that experience a hard time during the labor period, well, I think you got it all wrong because also giraffes clearly also face their fair share of labor pains.

How it all starts.

Masai giraffes a subspecies that is commonly encountered during Kenya safari to many of Kenya safari tour destinations has a gestation period of about 14-15 months and for this particular giraffe mother to be, that period had just come to an end and it was time for her to usher her calf into this world. Unlike humans, giraffes give birth while standing and it wasn’t any different for this particular giraffe as it stood still to gather all her energy to deliver her baby calf. This beautiful and so real ordeal lasted about 1-2 hours for this giraffe and at the end of it all, there it was a new life of a baby giraffe was born.

Life is never easy for any of these youngsters because as they are brought into this world, they have to brace for their first challenge which is a hard landing to the ground since their mothers never lie on the ground while giving birth but rather opt to stay standing given their huge body mass and incredibly high body height which would make it hard for them to stand up again after birthing since the process drains them dry of all their energy levels. The other theory that has been advanced by scholars to explain why these animals do this is that they want to be ready to defend their newborns in case of any attack from predators which are always lurking around trying to prey on an easy target just like a new calf. 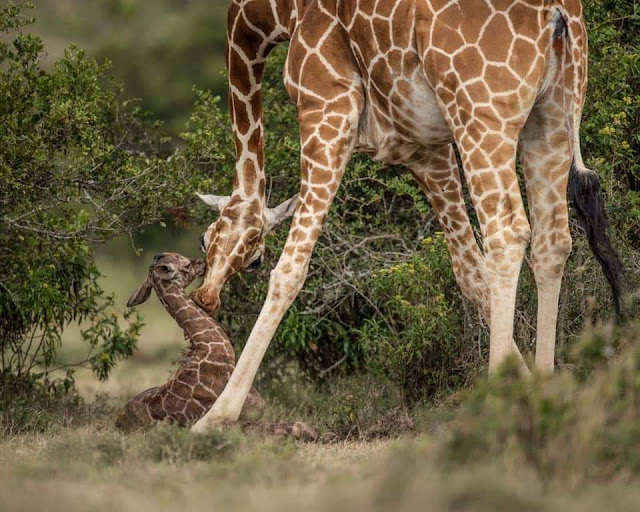 Just like her mum had experienced a hard landing while she was being born probably 10 or more years ago, her calf also had to go through the same because that’s natural to them. On making it safely to the ground, the month dries her calf by licking off any embryo material off its coat mainly as quickly as she can because she wants to hide the scent of newborn baby from potential predators that wouldn’t think twice before trying to locate where the scent of their potential next meal is coming from. 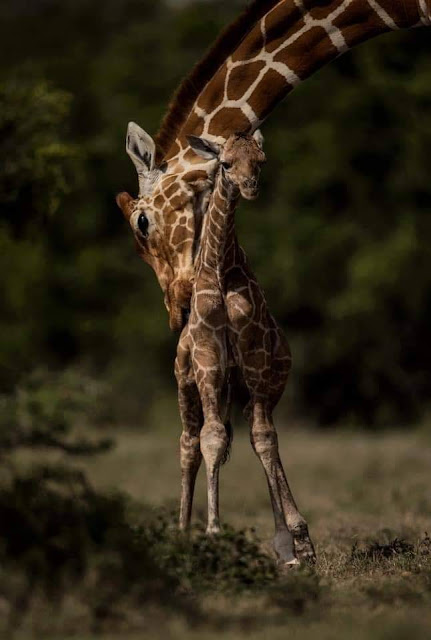 The other reason for this is the mother’s burning desire to create an everlasting bond between herself and her calf. Although still frail and weak, the newborn calf has to gather its strength quick enough within a period of less than an hour so that it is able to stand firm and even run as fast as it can if required and this is because the wilderness is full of predators waiting to have a quick snack bite on anyone and anything that potential prey that is available for them. After surviving this brutal entrance to the new world of the living, the calf is now faced with a tusk of learning all the survival techniques that from its mother that would give it a chance to make it to full adulthood in a place where survival is basically for fittest and the anyone who falls short of that will make either lunch or dinner for the top hunters of the savanna.

Masai giraffes can be encountered during an Africa safari adventure to Kenya and Tanzania. While in Kenya, a Kenya wildlife safari to any of southern Kenya safaris destinations such as Masai Mara National Reserve, Nairobi National Park, Lake Nakuru National Park, Tsavo East National Park, Aberdares National Park and Amboseli National Park. Kenya wildlife safaris to any of these parks not only give you an encounter with these tallest land mammals but also a wide variety of other stunning African wild animals which include Africa’s big five game – lions, African bush elephants, African leopards, lions and the rhinoceros. Other animals you can encounter on these safaris in Kenya include the plain zebras, the Thomas gazelles, the famous wildebeests and many other ungulates.

In Tanzania, you can be assured of fascinating sightings of the Masai giraffes in all its Tanzania wildlife safari national parks especially in the northern Tanzania tourism circuit which includes Tanzania safari parks such as Lake Manyara National Park, Tarangire National Park, Ngorongoro Conservation Park and Serengeti National Park. However Tanzania safari tours to Serengeti national park and Kenya safari tours  to Masai Mara have one thing in common and this is the possibility to give you of encountering the spectacle of the great wildebeest migration in which millions of animals particularly wildebeests and zebras go on a treacherous journey of over a thousand kilometers crossing from Masai Mara into Tanzania’s Serengeti National Park. 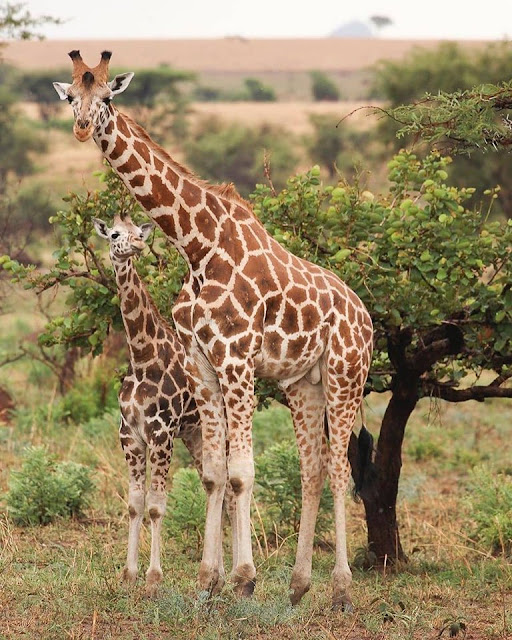 What makes this migration so thrilling for you to see is the way these animals plunge themselves one after the other into crocodile-infested Mara river in which these hungry crocodiles gather from and wide to prey on these seemingly mad or frightened animals that have seem as if something has frightened them for them to decide to jump one after another into their own oblivion with no second thought whatsoever.

Besides Rothchild’s giraffes, a Uganda safari tour experience gives you also an enchanted opportunity to enjoy thrilling encounters with several of the 5 big Africa game and a variety of other wild mammals. Since Uganda is one of the highly revered Africa birding safari destination, a Uganda bird watching safari to any of these parks gives chance to catch glimpses of several of the 1070 bird species that roam the skies of this beautiful pearl of Africa.

If you fancy an encounter with these majestic animals, on your next Africa safari adventure feel to check out our page Kenya safaris tours website which gives you a wide range of Kenya safari package options basing on the numbers of days of interest and destinations to be visited. These include short Kenya wildlife safaris and long Kenya safaris. Since east Africa is a famous region for its Africa gorilla safaris adventures that place in Uganda, Congo and Rwanda, you can decide to extend your Kenya wildlife safari to any of these gorilla destinations for a gorilla experience.

As of today Rwanda is positioning itself as a luxury Africa gorilla tour destination of choice as it has done so much in establishing luxury facilities especially lodges to cater for the needs of luxury tourists in a bid to lure more luxury or high profile personalities to visit Rwanda for a luxurious gorilla trekking Rwanda experience. Some of the famous personalities that have already visited Rwanda to undertake Rwanda gorilla tours include Ellen DeGeneres a TV personality who is the host of the Ellen DeGeneres tv show in USA. Luis Van Gaal a former football coach of high profile football teams in Europe such as Bayern Munich, Real Madrid and Manchester United, David Luiz a professional football star who plays for Arsenal in the English  premier league and Maria Sharapova a former no 1 tennis star has also followed suit in taking on this Rwanda gorilla safari adventure. Congo is another gorilla destination of choice. 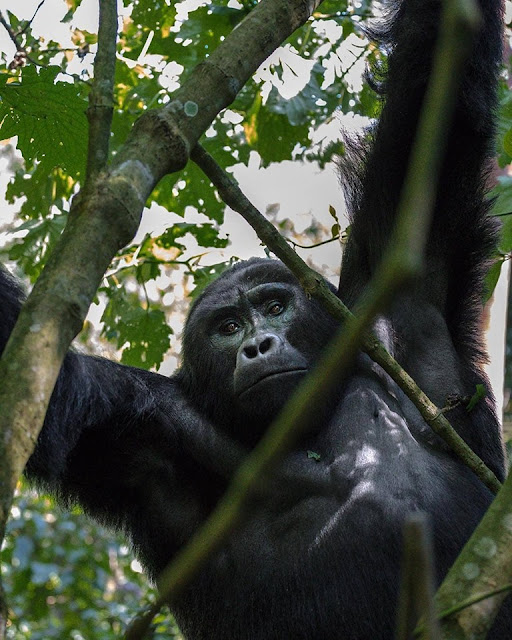 Here are some bestselling gorilla packages