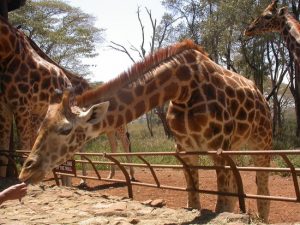 Quite often some places on our bucket lists don’t turn out to be as cool as we thought they were. Since neither Matt or I were sponsored to stay there I could write absolutely anything I wanted about this place. I’m pleased to tell you that the Giraffe Manor is absolutely worth your time and money.

As one of Nairobi’s most iconic buildings, Giraffe Manor has extraordinary appeal, that harks back to the 1930s when European visitors first flocked to East Africa to enjoy safaris. With its stately façade, elegant interior, verdant green gardens, sunny terraces and delightful courtyards, guests often remark that it’s like walking into the film Out of Africa: indeed, one of its twelve rooms is named after the author Karen Blixen.

However, the most fascinating thing about Giraffe Manor is its herd of resident Rothschild’s giraffe who may visit morning and evening, sometimes poking their long necks into the windows in the hope of a treat, before retreating to their forest sanctuary. Giraffe Manor can be booked for the night or as part of a complete tailor-made safari with The Safari Collection.

Giraffes sticking their heads through the windows for breakfast and reaching to your balcony… you might have seen these incredible photos on social media already. It’s the Giraffe Manor. When I first found out about it, way before Instagram was even popular, I was dying to go there. Sadly, during my visit to Kenya the hotel was closed for refurbishment.

Nearby is the Giraffe Centre, which is a sanctuary for the ten giraffes that live on this land (giraffes are endangered animals). Because of course: as beautiful as this vine-covered manor is, the main draw is undoubtedly the fact that Giraffe Manor is frequented by a family of giraffes. While these are still wild animals and no interaction is guaranteed, the giraffes know that there are certain times of the day (early morning and mid-afternoon) where guests will be ready with buckets of grass pellets to feed them. Some of the front-facing rooms also get to feed giraffes through their windows if they’re lucky. At breakfast time, the giraffes stick their heads in the window in order to be fed, which looks a little something like this: 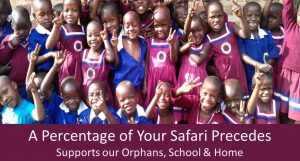